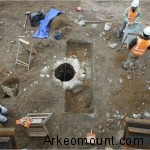 Archaeology in the cities. Different. It is high time for Arkeomount’s reader to know more about an archaeology dig in the middle of a modern town. We were waiting for an international scenario and last month’s news suggested us to get in touch with Julie Labate, archaeologist at Geoarcheology Research Associates, in New York (www.gra-geoarch.com ). Julie kindly accepted our invitation to this interview.

Last month in Miami a new dig revealed a major prehistoric Native American at a downtown site (i.e. FoxNews) and since a couple of years an interesting work is going on on the west bank of Manhattan, in New York.

1)      Julie, in 2005 you worked for The Archaeological and Historical Conservancy when they were excavating in Miami at Met 1 and the Flagler Hotel. May you please remind us what happened there? Why did you start to dig and what did you find? Are these 2005 researches related to the new ones?
Julie Labate (JL): “When I joined AHC in 2005, the Met 1 project (which included in the Flagler Hotel) was underway for a couple of years at that point. As this was one of my first archaeological positions, I was excited and anxious to learn about the “corporate” side of American archaeology, known as Cultural Resource Management (CRM). I remember working along side backhoe operators, attempting to record as much information as possible about the Flagler Hotel and Tequesta remains underneath. As a historic archaeologist, I was very much interested in the Flagler hotel excavation as this was one of the first hotels in Miami. Built in 1897 by entrepreneur Henry Flagler, the hotel was later condemned and razed in 1930. As we excavated, we recovered remnants of the electric light fixtures (first in a hotel in Miami) and hotel keys.
Underneath the hotel were the remains of a portion of the Tequesta village, though badly disturbed from the construction of the hotel. The findings in 2005 were important because these earlier excavations led to the discovery of the intact Tequesta Village site just recently found”.

2)      Now you are working as archaeologist at Geoarcheology Research Associates, in New York and you are just finishing up an excavation on the Upper West Side of Manhattan. Can you tell us more about it? What did you find there?
JL: “Similar to the excavations in Miami, this excavation began due to the development of a condominium on the Upper West Side. We worked along side developers from Tishman Construction and were successfully able to recover artifacts from a late nineteenth-century secondary refuse deposit. Geoarcheology Research Associates was able to recover whole plates, cups, leather shoes, spectacles as well as items as small as marbles, dolls, coins and straight pins. This refuse presumable was used to fill up the land along the Hudson River in order to create more area for development in Manhattan”.

3)      As usual, in Arkeomount we try to le tour reader figure out how archaeological researches are run in unusual places (as deserts, mountains and so on). Could you tell us more about how do you work in New York City? Which methods and tools can you use? And which ones are you unable to use?
JL: “Working in New York City, we relied heavily on mechanical tools to excavate. Backhoes and mechanical excavators were employed to remove large amounts of the deposits. This is a common practice in American cultural resource management”.

4)      Which devices and expedients do you have to carry out to dig in Manhattan?
JL:”In addition to the mechanical excavators, typical archaeological tools were used, such as a total station as well as hand digging in order to collect a sample of artifacts in different areas”.

5)      Where will the findings  be placed within Manhattan? are you (or any institution) planning a place in a museum or a public show?
JL: “Ultimately, the collections belongs to the developer; however, typically we will house the artifacts in a repository. Some of the more “interesting” pieces are planned to be displayed in a school that is being built on the property”.

6)      We find your blog (http://trowelpoints.wordpress.com/) really interesting as it shows how to communicate something which is not always easily communicable: there are weekly games and funny photos. How important is communication? Are Americans interested in archaeology?
“We here at Geoarcheology Research Associates, believe public outreach is important. The blog, as well as our involvement with other social medias (i.e. Facebook, Twitter, Instagram) help in reaching out to people who may or may not know about archaeology. We also host a weekly radio show, “Indiana Jones: Myth, Reality and 21st Century Archaeology” on VoiceAmerica. This show, well as all of our public outreach efforts, targets audiences interested in archaeology or those who may want to learn more”.

7)      Finally, can you tell us something about next tasks and/or diggings scheduled at Geoarcheology Research Associates?
JL:”Right now, we are in the process of finishing up the excavations on the Upper West Side. In the immediate future, we will be working with a wastewater treatment service company in New Jersey, Somerset Raritan Valley Sewerage Authority. Afterwards, we hope to expand into the international market. Next stop, Italy?”