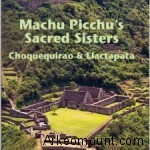 “Machu Picchu’s Sacred Sisters, Choquequirao and Llactapata – Astronomy, Symbolism and Sacred Geography in the Inca Heartland” by Gary R. Ziegler and J. McKim Malville have just been published (you can buy it on Amazon at this link). Published by Johnson Books of Boulder (Colorado), the manuscript is a readable composite of exploring adventures stories,  expedition journal notes and carefully-researched archaeological data, descriptions and interpretations gathered from more than forty years of extreme archaeological exploring in the remote Andes of Peru.

We went in touch with one of the author, Gary Ziegler. American archaeologist, Gary is a Fellow of the Royal Geographical Society of London and the Explorers Club of New York and was recognized as
NASA Distinguished Lecturer 2013. His accomplishments include the discovery of important new archaeological sites and the first ascents of seven major ice peaks in Peru. Along the way, he worked for National Geographic and now is in Colorado as a team leader of the local (in Colorado) Search and Rescue. Co-author is the archeoastronomer, Kim Malville, Professor Emeritus at the Department of Astrophysical and Planetary Sciences of University of Colorado (Boulder) and Adjunct Professor at  James Cook University (Townsville, Northern Queensland, Australia).

Arkeomount(A): “Dear Gary, you wrote this book with Kim Malville (University of Colorado’s archeoastronomer) and you wrote us that you two have been working on this book for several years. The reader can find exploring adventures stories,  expedition journal notes and carefully-researched archaeological data, descriptions and interpretations gathered from many years of extreme archaeological exploring in the remote Andes of Peru. After having accomplished a lot of studies about Machu Picchu, in the last years you focused your work on two others archaeological Inca’s complexes: Choqueqirao and Llactapata, perfectly described in the book. Which was, if there was, the connection about these two complexes and Machu Picchu? You call them the “Machu Picchu’s Sacred Sisters”: did the Inca “lived” and “used” these three complexes together? How? Are we facing a “pattern” or a “model” replicated more and more times in the Peruvian Andes?

Gary Ziegler (GZ): “Choquequirao and Machu Picchu each served as multi-purpose centers, designed to support a year-around calendar of ceremonial activities, regional administrative functions and state sponsored activities. These important, Inca heartland sites were part of a network of royal estates branching outward from the Imperial capital, Cusco.
The Inca, Pachacuti, established a pattern for royal estates during the height of imperial Inca expansion across western South America. He constructed estates at Pisac near Cusco, at Ollantaytambo, a preexisting town with ceremonial aspects and Machu Picchu.

The impressive estates at Pisac and Machu Picchu appear to have established a pattern followed at Choquequirao. Important, high-status construction is centered on a ridge top with a higher mountain behind and a lower distinctive promontory in front, with a sacred river flowing below in view. Each hosts a series of fountains or baths passing through the ridge top groups. Experience from our field investigations leads to the conclusion that important Inca monumental sites were carefully planned and designed in accordance with astronomical alignments, precisely placed in relationship to sacred rivers, mountains, and celestial phenomena. Choquequirao and Machu Picchu fit this view. They are uniquely located at a convergence of sacred terrain features with celestial events most important to the Inca state religion and Andean tradition.
Although not a separate estate, Llacatapata is an important sister site connected to Machu Picchu in a unique relationship. Located less than three miles away, several hours travel time during Inca occupation, Llactapata was a busy complex of interconnected groups, ceremonial features, temples, usnus, a water-focused sector, and a large urban, agricultural district supporting Pachacuti’s royal estate. The identification and study of the Llactapata archaeological complex added significantly to our knowledge and understanding of Machu Picchu as the hub of a complex neighborhood of carefully placed, interrelated ceremonial sites reaching toward Cusco and the far Vilcabamba.
A: We found the book very interesting also because the deep astronomical alignments you found in both the sites. Can you tell us something about the technique and the methodology you used to gather the astronomical data? What is your kit for the astronomic surveys? How many times did you have to get there to collect these data? How many people worked on these project “on the field”?

GZ: We begin preliminary field studies with knowledge of compass azimuths for astronomical features such as the solstice sunrise and sunset. Measurements are taken using a surveying compass as we survey and map out a site plan or diagram. If  more precision is needed as at the Sun Temple at Llactapata, we return later with a theodolite and tripod.
Here is an excerpt from field notes in the book:

Notes
15. A first step in examining a newly found structure is to determine
its size, form, and alignment. After initial machete clearing
for access, alignment of entrances, windows, and walls is determined
with a surveying compass. We learn much about mountain Inca
sites by structural designs indicative of function in conjunction with
angles of view and probable sightline focus. The general layout of
a group or compound is determined and initially evaluated as well.
A rule of thumb is to sight directly out an entranceway or window
at the angle of view. Knowing the magnetic azimuths for important
Inca events like solstice sunrise and sunset calculated for foreground
elevation is necessary. As example, a 50-yard long walled corridor at
Llactapata looks out toward the center of Machu Picchu some 2 miles
away at an angle of 64.3 degrees, the angle of June solstice sunrise
on the distant horizon, and close to the rise of the important constellation
Pleiades at 67 degrees. A reasonable interpretation is that
the corridor was intended to view these important events when they
appeared over Machu Picchu. This and other evidence allowed us to
conclude that this was a feature of a temple of the sun similar to the
Coricancha in Cusco. 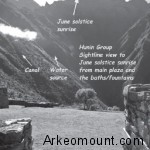 The projects have varied from as few as two, working with local helpers and machetes up to a team of 17 during the initial exploration and uncovering of Llactapata.  We returned  there for a week or more each dry season over three years. Choquequirao was a much larger project involving a diverse team from the government agency, COPESCO  which has worked there seasonally for many years under Cusco archaeologist, Percy Paz.  We worked together sharing data and projects as I brought in small volunteer groups for shorter periods each year.

A: You write about the “shaped stones” (replication stones): stones shaped by men as to replicate other landscape elements as mountains. We can find them among the Andes as in Machu Picchu, but you write that probably there were also in Choqueqirao. According to British researchers as Richard Bradley, natural places have to be considered part of the archaeological data: do you agree?

GZ: Yes – I very much agree. The natural landscape is closely integrated, enhanced and incorporated in the design of Inca sites. Any interpretation of the meaning of Inca made structures and features such as shaped-stones, huacas, must be included in analysis. Theorizing a bit, a shaped-stone replicating a prominent, nearby mountain (apu) may have intended to bring the spiritual power of the mountain to the huaca, thereby empowering the local object or site.

A: Zuidema and Bauer proved that the “seque” system – a sort of invisible layer centered in Cusco on which the Incas put their sacred places and/or gave their sacred ceremonies – was a reality among Incas. Do you think that at the beginning of their civilizations the Incas gave special importance to unaltered features of the landscape and “then began” to manipulate natural elements to replicate “huacas” and peaks (Apus)? Can you confirm that the “replication stones” practice was a habitual practice in the Inca’s Andes.

GZ: The Inca were inheritors of several millennia of cultural traditions, beliefs and Andean spiritualism which they incorporated and enhanced while imposing their own state-sponsored sun cult. The ceques system may be an example of Inca genus for organizing time and space beyond that of earlier cultural horizons.
Certainly, modification and enhancement of natural features was long a part of Andean tradition which the Inca continued. It is likely that there are earlier examples of replication however, I can’t say with certainty that replication stones were common traditionally. I know of only a few Inca sites that have them although shaped and unshaped huaca stones are common.

A: According to your data and knowledge, but also according to your instinct, do you think there could be any other “Inca’s complex” – or better, any other “Lost Cities” – out there still to be discovered? If yes, what let you think so and what could you tell us about it? To complete the question: are you planning to look for it?

GZ: Large mountainous, cloud-forested areas of the Andes remain to be more completely explored. It is certain that numerous hidden ruins and even perhaps, a ‘lost city’ or two remain to be revealed although not on the order of magnificence of Machu Picchu and probably not  built by the Inca.
Undocumented Chachapoya sites abound on almost every mountain top in the north-central Peruvian states of Amazonas and Loreto. Few visitors venture far from the tourist routes out of Cajamarca or much beyond the well-known fortress site, Kuelop.  On the two occasions we have looked there, our exploration team located interesting ruins, the first in 1997 and again three years ago. Now that  work is largely finished at Choquequirao with the book finally competed, I hope to investigate  the group that we briefly touched upon during the most recent expedition.
A note from my journal: Crumbling vine-covered walls, tall, round houses and mysterious shapes loom inviting from under dense, dark foliage on a steeply climbing ridge. Sadly, we are out of time and must return to Lima.  I note the coordinates – we will return. For the bold and adventurous the last, lost city is still out there.

A: In its forword to your book, John Hemming (Former Director of the Royal Geographical Society) remembers the Italian Antonio Raimondi  (addresing him as “Peru’s greatest geographer, who never reached Choquequirao, but he was sure that it was Manco’s Vilcabamba”). He worked both on chronicles and on exploration expedition. Do you think that the Spanish chronicles have still something to tell us in order to drive us to new discoveries in the Andes? Or do you think that new technologies surveys and explorations have to be prominent in such a research?

GZ: Recent technology, remote, airborne LIDAR sensoring and other new techniques may help but boots on the ground and sharpened machetes are still required to peel back the mysteries. Documents from the early conquest years continue to turn up, both in Peru and Spain. An important element  of good scholarship is the search for and utilization of information from these sources. The most exciting aspect of Inca study is the application and comparison of frequently, contradictory historical references to physical archaeological evidence from the field. I love a good enigma…

A: Thank you Gary!

In the next week we will publish the Italian version of this interview.
To buy the book on Amazon click here.